I've recently happened upon, as one does, a new blog I enjoy reading, because it was listed as a favourite on at least couple of blogs I already look at. Felicitously, just around the same time I discovered Dove Grey Reader's blog, the blog author, "a Devonshire based bookaholic, sock-knitting quilter who happens to be a community nurse in her spare time," discovered Janet Frame.

She does such good reviews, and I can recommend her two posts on Janet Frame's work. First she responded to Towards Another Summer.
Then she wrote about The Lagoon and other stories (click on the links to read the two reviews). 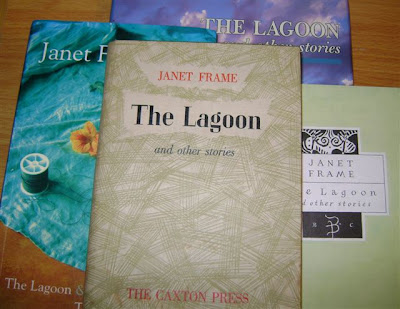 Janet Frame's first book The Lagoon was originally published by Caxton in 1952, but due to a typo on the imprint page it is usually listed in bibliographies as published in 1951.

There are two editions currently in print: by Bloomsbury in the UK and Random House in NZ.

Posted by Pamela Gordon at 3:36 PM