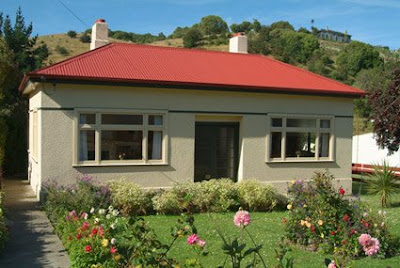 Open to the public 2pm to 4 pm in the summer months
(November 1st to April 30th)
and at other times by arrangement.

The home which the Frame family lived in from 1931 until 1943 is administered by the Janet Frame Eden Street Trust. Their AGM was held last week and as I'm on their advisory panel, Chair Carol Berry sent me a copy of the annual report.
The Trust has reported a successful third year of operation. As well as opening the house to visitors, they held a creative writing weekend, they have run educational programmes, and given several talks.
The house has continued to attract some good publicity and accounts of it regularly feature on the blogosphere as travellers record their impressions of exploring "Janet Frame's Oamaru."
The visitors book at the house reveals that for many, visiting the house is a deeply inspiring experience.
Of the several hundred visitors,
9% were local
9% from Auckland
7% Wellington
7% Christchurch
8% Dunedin
27% other NZ centres
11% Australia
9% USA
6% UK
6% Europe
1% other countries.
Curator Ralph Sherwood reported that invariably the visitors had read Janet Frame's work and their visit to 56 Eden Street was something of a ‘pilgrimage’ seeking to find a definitive point of contact with Janet Frame’s own experiences and inspiration and to enhance their understanding and appreciation of her life and work.
In recognition of the valuable work of the Eden Street Trust, the Trust was awarded First Place in the Arts and Culture section of the inaugural Oamaru Community Awards in September 2008.
Very well done indeed!
It was a rewarding experience for our family to be involved in what Janet called the "re-framing" of the old house, which had been long neglected. Mum and Janet advised the JFEST volunteers on the differences between the modern state of the house and its characteristics when their family had rented it. Some "renovations" that had been done to the house were reversed: especially important was the re-installation of that heart of the home, the coal range. The house was reroofed and various repairs carried out. But the house was not completely restored to its original condition, hence the tongue-in-cheek term "reframing".
Special care has also been lavished on the gardens, again following the advice of June and Janet as to the kinds of flowers their family grew. The old pear tree with its two grafted varieties, still bears bountiful fruit. And the quince tree provides enough fruit each year for a batch of quince jelly, jars of which are sold at the house.
Information about visiting the house can be found by contacting the
Oamaru i-SITE Information Centre
1 Thames Street
Oamaru, New Zealand
Phone: +64-3-434 1656
Fax: +64-3-434 1657
Email: isite@visitoamaru.co.nz
There is also a VISIT OAMARU website with more information about the town and environs.
Posted by Pamela Gordon at 9:11 AM