"unerring in the penetration of characters' motivation and behaviour" 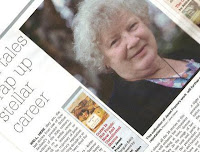 "This collection of Janet Frame's work will further enhance her reputation."
~ New Zealand Herald (20 October 2012)
Review of Gorse is Not People: New and Uncollected Stories by Janet Frame

"This is a collection to spend time over, to savour, and to wonder at the author's ability to tune in so accurately to the life of her times."
"She consistently drew on an imagination and sensibility that illuminated our contemporary lives and minds."
~ Reviewed by Gordon McLauchlan for the NZ Herald Canvas Magazine

A large part of this review is devoted to discussion of the possible trajectory of Frame's posthumous reputation after her "stellar career". McLauchlan himself is reasonably confident, with some hedging, that Frame's literary reputation will not suffer the same 'long slump' as some of her contemporaries. He concludes:

"I would think little doubt surrounds the survivability of Frame's reputation as a writer."

NB: This NZ Herald review is not archived along with other reviews on the Herald's web site, which is a shame because I'm sure that the international Frame fans who mostly read this blog would be quite interested to read this commentary from a local New Zealand perspective. There's a definite air in the review that Frame's career, though remarkable, hangs in some sort of balance, with her work potentially time-sensitive, being "deeply entrenched in the language of her time", and that this particular publication has signalled a "wrap", and a possible move for Frame, or at least "some of her stories" (those that illustrate her "pitch-perfect ear for idiom") "out of fashion".

One of Janet Frame's favourite expressions was "We'll see..." and indeed we will.

Certainly the headline "Final tales wrap up stellar career" was, given this week's news that there is one last Janet Frame novel to come, a little premature.
Posted by Pamela Gordon