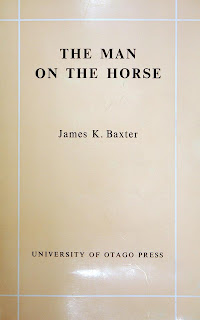 Cover of The Man on the Horse by James K. Baxter,
University of Otago Press 1967

This book of essays based on addresses given to audiences while the poet was Roberts Burns Fellow at the University of Otago in 1966 and 1967, was:

Janet Clutha was the pseudonym Janet Frame lived under in order to try to preserve some degree of anonymity despite her literary fame. She had legally changed her birth name of 'Janet Paterson Frame' to 'Nene Janet Paterson Clutha' by deed poll in 1958.

James K. Baxter and Janet Frame were close friends but neither of them 'blabbed' about that friendship. As her name 'Janet Clutha' was not publicly well known in the 1960s, Jim Baxter had shown by his use of Frame's legal name in his dedication, that he was concerned to preserve his friend's privacy.
Posted by Pamela Gordon