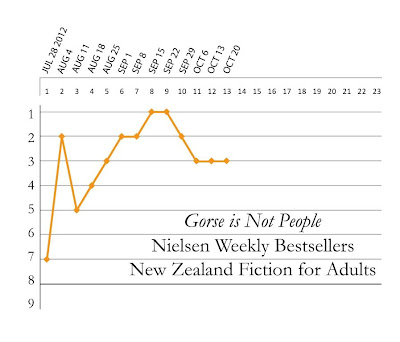 Fun with graphs: the first 13 weeks on the top ten
﻿
The book of new short stories by Janet Frame is certainly finding favour with book buyers, having featured prominently on the Nielsen BookScan weekly bestseller list from its first publication on the 25th of July this year (making a debut at #7 after only a couple of days on shop shelves).

The other titles that accompany Gorse is Not People on the top spots of this list include vigorously advertised genre fiction titles as well as books that unlike Gorse are sold at discount warehouses, so this success for the Janet Frame volume is really quite astonishing given that there has been such low key promotion for it and a discernible reluctance on the part of some book media gatekeepers to even acknowledge its existence. We're not sure why so many book review pages have not treated the release of this superb collection of new stories as the major literary (and culture history) event that it obviously is. Perhaps they mistakenly believe it to be a back list selection? But it is heartwarming to note that the reviews - when they come in - have almost invariably been rave reviews noting the high quality of the stories, most of which have never been seen before.

Best of all, it must be word of mouth about the freshness, relevance and readability of the stories in Gorse is Not People that is working to make this such a popular NZ fiction title.

Gorse is Not People gained a place on the top ten NZ Fiction bestsellers list for the whole of 2012.

* It spent over 6 months on the Nielsen top ten and still makes intermittent appearances on the chart.
Posted by Pamela Gordon at 12:43 PM