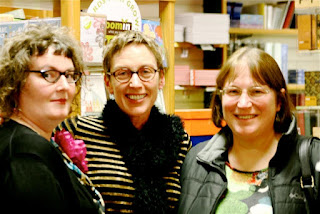 at Bill Noble's Farewell
with UBS staff Bronwyn Wylie-Gibb and Rhian Gallagher
Photograph: David Howard
Bill Noble, long time manager of Dunedin's University Book Shop and one of the great New Zealand booksellers, retired recently and I had the privilege to attend his farewell function last month, at which a large crowd of booksellers, authors and prominent figures from the publishing industry joined with friends, family and UBS staff to celebrate a remarkable career. There were entertaining and informative speeches with many accolades and great affection, and considerable amusement at one of the gifts Bill received - a Kindle concealed inside a hollowed-out book. 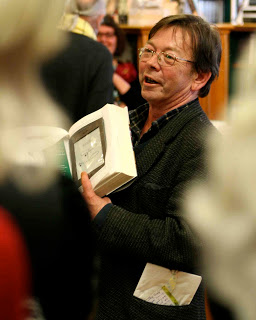 Photograph: David Howard
The University Book Shop under Bill's leadership has become one of the very best book stores in New Zealand and hosts many of the local book launches, including the Janet Frame estate's launch in August this year for Gorse is Not People. We wish Bill all the best for the future.
Otago Daily Times interview with Bill Noble
Posted by Pamela Gordon at 5:46 PM