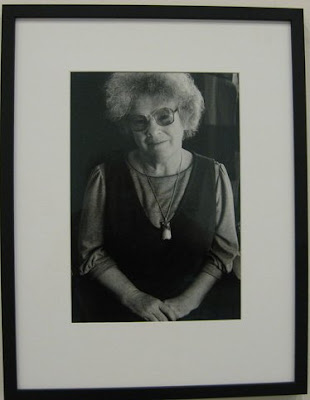 Janet Frame appears as one of the 60 Makers of Modern New Zealand in a exhibtion at the New Zealand Portrait Gallery in Wellington, curated by prominent economist and commentator Brian Easton.

The 1989 photograph of Janet Frame was taken by the superbly talented photographer the late Robin Morrison.

I've only just noticed that this exhibition is on - it certainly looks worth visiting Wellington just to catch up with it! (It will be on show until the 12th February 2012.)

It was a bit disappointing to notice some errors in the short biographical sketch of Janet Frame that has been composed for the exhibition. Unusually for Wellington, which it seems these days is pretty much the home of preferring fiction about Frame to fact, this short bio is not a particularly toxic summary of Frame's life and work - it really does seem to try to be fair to her and to avoid pathologising, unlike the egregious 'official' government biography on the Te Ara Encyclopedia of New Zealand website.

But in spite of the obvious good will, Frame's middle name Paterson is misspelled and there is the usual condescending claim that Frame was in need of a string of male patrons who "supported her" (some of them are even named, causing guffaws to anyone who is aware of the real story behind some of those relationships).

The misogynistic characterisation of Frame as dependent on strong male guardians was propagated early in her career and it was used at times to justify a fair bit of behind-the-scenes meddling as well as some overt attempts to bully her. The thesis of the Frame who didn't really know what was best for herself, was unfortunately embraced by Frame's biographer Michael King who shaped his biography with that pervading attitude. Maria Wikse in her monograph on 'Janet Frame's biographical legend', identifies the conceit of "a woman writer who has her career (and life) taken over by several men, without protest" as "the dominant narrative" of the King biography, and I, along with many other commentators on Frame, agree with her analysis in that case. Michael King seems to have adopted this patronising attitude towards Frame uncritically from his idol Frank Sargeson, whose biography King wrote first. As just an example, wherever King refers to a friend of Frame's whom Frame first met while she was staying with Frank Sargeson, that person is later always referred to as "Frank's friend". So even though Janet developed strong independent friendships, for instance, with Elizabeth Dawson and Jess Whitworth, King will subsequently refer to Dawson or Whitworth as "Frank's friends'. Frame it seems, only has 'patrons' not 'friends', and if she has friends, they are really borrowed from someone else.

Ironically, the effect of Sargeson's successful legend building of Frame as hopeless and dependent on male patronage, and King's popularisation of it, is shown in the fact that in the 250 word portrait exhibition biography of Janet Frame, Michael King's own name has now appeared on the fantastical list of the men who "supported" the "peripatetic" Frame. (If Michael were here, he would surely protest himself, at seeing his name on the list - and he'd protest at some of the other names too, for instance Denis Glover, whose alcoholic incompetence led to a five year delay in the publication of Frame's first book!) If anyone benefited professionally and personally from their collaboration, it was Michael.

These are but minor quibbles of course. So what if it's so hard to eradicate the sexist agenda? Frame triumphed anyway, and in this exhibition she is given fitting recognition for her achievements and for her influence.