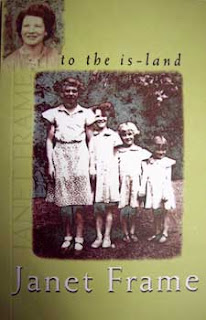 To the Is-Land
The first volume of Janet Frame's autobiography
available in NZ as a Vintage paperback edition from Random House NZ
also available as an omnibus edition
in NZ and in the USA titled: An Autobiography
in Australia (Vintage) and the UK/Commonwealth (Virago)
under the title: An Angel at My Table

In the spirit of Christmas, New Zealand's union for Post Primary Teachers, the PPTA, is gifting our Prime Minister John Key a book a day for twelve days, accompanied by a public letter letting him know the enlightening social and economic lessons he might learn if he reads those books over his Christmas break.

The teachers have chosen To the Is-Land - the first volume of Janet Frame's autobiography as their gift for day nine of the twelve days of Christmas, and done a good job of explaining how important the educational reforms were than enabled a talented working class girl like Janet Frame to get a secondary school education when most others from her social class had formerly been denied that opportunity. Janet Frame went on to become a great and successful Kiwi icon world famous for her writing that never pulled its punches in criticising social injustices.

The lessons continue, and I know that Janet Frame would have applauded the message:

"This book is a reminder of our enlightened forebears for whom education was not only a right but a public good. Every New Zealander was guaranteed a world-class education at their local school, followed by low cost tertiary education or the opportunity to take up an apprenticeship nationally. Rather than being left to the whims of employers, apprenticeships were managed nationally and supported by a web of training through night classes and polytechnics."
Posted by Pamela Gordon