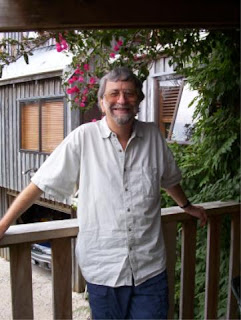 Janet Frame's friend and biographer, and my friend and colleague, Michael King would have turned 66 today. I took the above snapshot at his bush clad Coromandel home just weeks before his untimely death.

Over the several years that Michael King was writing and researching Janet Frame's biography, he was accepted by her and the rest of her close family and friends, a regular visitor to her home and to our homes, becoming so familiar that the members of her circle treated him almost like "one of the family" and we were devastated when he and his wife Maria were killed in a horrific car crash only two months after Janet Frame's death. 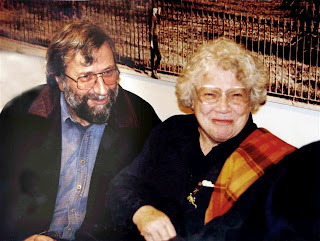 Michael & Janet 1998
They shared a wicked sense of humour

Despite some public misconception about the status of Michael King's biography of Janet Frame, it was not strictly an 'authorised biography' and it was certainly not controlled or manipulated by her; it was more, as he admitted himself, 'tolerated'. She did agree to cooperate with his research and gave him unprecedented access to her inner circle and to her archives and her papers. She was exceedingly unstinting with her time, having almost daily contact with Michael for several years as he wrote the biography (either face to face, by phone, fax, email or snail mail). Then he curated and toured an exhibition based on her life and work, and he followed that by publishing An Inward Sun: The World of Janet Frame (2002) a book of photographs of the exhibition also drawing from the photo albums of Frame and her friends.

Over the years Michael was engaged in his biographical work on Frame (with her generous patronage and assistance), Michael held numerous prestigious well-funded fellowships and scholarships and major residencies (at Auckland University, Waikato University, Otago University and at Georgetown University, Washington DC) and he also received some major grants, and the Prime Minister's Award for Non-Fiction  ($60,000) in 2003. His biography Wrestling with the Angel: A Life of Janet Frame (2000) won the Wattie NZ Book of the Year Award. Perhaps for the first time in his career he was earning enough over those years (including advances and royalties from his prolific publishing, and his sizeable share of the NZ Library Fund) to keep his chronic severe anxiety about money (as he often mentioned) at bay. It was a terrible irony that it was right at the end of his life that his last book, A Penguin History of New Zealand, became a rampant bestseller and would have afforded him even more material comfort into his old age than he had ever enjoyed. And he had so many more plans. But as fate had it, among his last published works were the obituaries he wrote for Janet Frame.

A group of Michael's friends and associates have founded the Michael King Writer's Centre in Devonport Auckland as a very fitting memorial tribute to Michael King, that in his spirit will advocate for writers and provide the resources and the community for them to be able to do their work.

In Janet Frame In Her Own Words we have published for the first time the transcript of Janet Frame's opinions about the Michael King biography as given in a radio interview with Elizabeth Alley on the occasion of the Dunedin launch of the biography. At one stage Janet laughs and says:

"I believe that Michael King has done a wonderful job of work . . . if I forget that I’m the subject!"
Posted by Pamela Gordon