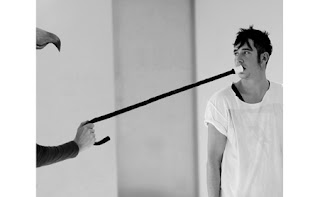 A new work of art from Janet Frame's friend, legendary dancer/choreographer Douglas Wright, is currently playing in the Auckland Festival of Arts.

Douglas talked about the piece for the NZ Herald.

Douglas and Janet shared a deep love and respect for the great classics of literature, as Douglas remembers, Janet referred to as "the deads":

He opens his notebook and quotes Vladimir Nabokov in Speak, Memory, words that beautifully define, for Wright, his kind of dance. "Innermost in man is the spiritual pleasure derivable from the possibilities of outtugging and outrunning gravity, of overcoming or re-enacting the earth's pull."

"Isn't that marvellous," he smiles.

He was reading Janet Frame at age 11, he says, later forging a deep friendship with her, and he uses her words to describe his ongoing choice of reading material. "She called them 'the deads'. Stendahl, Tolstoy, Virginia Woolf, Proust ..."