A pocketbook from Norway 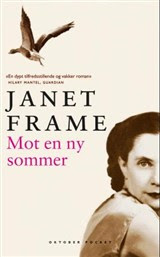 Norwegian pocketbook edition 2011
Busy times on the international front lately. New contracts have been signed recently with Russian and Romanian publishers, and paperback sublicences have been approved with France and Germany.
The Norwegian publisher has just sent the new pocket book edition of their Towards Another Summer, Mot en ny sommer, first released as a hardback in January 2010.
There have been symposia in France on The Lagoon and other stories, and the scholarly reflections on Towards Another Summer are really getting underway with a couple of papers on it being presented at a conference in Turkey in April.
The Spring 2011 edition of the Commonwealth Essays and Studies journal No 33:2 is to be on the theme of "Janet Frame's short fiction".