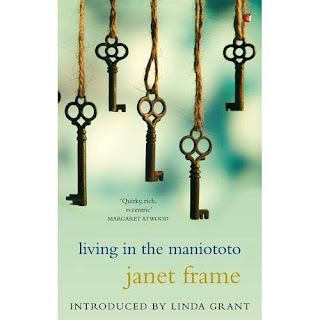 I was so happy to hear last year that prominent UK literary blogger dovegreyreader wanted to feature Janet Frame on her blog. She has an excellent series called "dovegreyreader asks" in which she asks authors to talk about themselves and their work. She wasn't able to ask Janet of course, but I agreed to answer some biographical questions about Janet.

This is an unusual step for me, and (apart from the fact that 2010 was the year from hell anyway) it took me a while to get around to the task. One of my problems of course was the long habit - drilled into me for my whole life - of keeping my mouth shut about my famous aunt. It wasn't just that Janet liked her family and friends to preserve her privacy. She wasn't 'hiding' any dirty secrets (although that doesn't stop some of the academics - not all of them, just the bottom-feeders - from making the search for scandal their highest priority!), Janet Frame just genuinely believed that it is the work that matters, not the life.

But dovegreyreader's Q&A was so nicely worded and provided an opportunity for a positive view of Janet Frame behind the scenes in her dedicated writerly life. I hope Janet's old and new fans enjoy the insights.

Here are some of the links to the Janet Frame week posts. If you aren't already a regular reader of the dovegreyreader scribbles blog, I won't be surprised if you find it an indispensable place to visit from now on. She is such a prolific and sensitive reader, and a wise and entertaining writer.

Here's a perceptive meditation from dovegreyreader on: Mona Minim and the Smell of the Sun.

What Janet liked to read, and dovegreyreader's reviews of The Lagoon and other Stories, Living in the Maniototo, Owls Do Cry,  and Towards Another Summer: March 17

Posted by Pamela Gordon at 4:00 PM