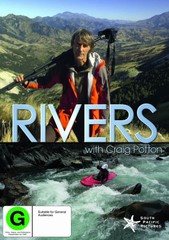 In 1958 while living in London Janet Frame changed her surname by deed poll to "Clutha" signalling her affection for the Clutha river. Thereafter Janet Frame was known in her private life as "Janet Clutha" (later Dr Clutha) but continued to publish under her birth name.

Fittingly, this Clutha River episode of the series "Rivers" quotes Janet Frame in praise of the river that had so captured her imagination.

The whole series is also available on DVD.
Posted by Pamela Gordon at 12:19 PM