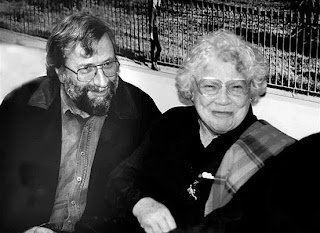 Janet Frame in good humour at one of several Mayoral Receptions she attended during her last years in Dunedin (Photo Reg Graham)
I've been astonished by seeing a particularly ignorant reference to Janet Frame's "reclusiveness" in an article in a New Zealand Sunday newspaper.

But I can't help being outraged when people who should know better dish up this garbage, and dress it up in a pseudo-literary context. The report is by a journalist who introduced herself to the famous author at a public event, was perhaps rebuffed (unsurprisingly since there is reference to an at least two year previous history of what sounds from the other side of the shorthand pencil a little like stalking), yet within those few seconds managed to look deep into Frame's soul, enough time to realise "that her reclusiveness wasn't mythical, but essential to her survival. To survive in the world, she seemed to need to live on its fringes." Oh dear, and yet, we are also told that Frame was immediately "ushered away to meet local creative luminaries".

So make up your mind, was Frame able to rub shoulders with those luminaries or not? If she was, then doesn't that contradict your argument that she can't "function in the world"? And did it occur to you that many of the "local creative luminaries" were actually longterm friends or acquaintances of Frame's, and that she actually preferred to spend time with her friends rather than being harassed inappropriately at a civic celebration by a self-important journalist who considers her own career is more important than respecting the occasion?

How did someone acting so like a paparazzo get so close to a celebrity anyway? Would a journo expect to be able to approach Peter Jackson or Angelina Jolie or the Queen or Obama (to pick some extreme but relevant examples) and strike up a best friendship based on a moment's introduction?

What was it about Janet Frame that made so many people not realise she was a celebrity? That made them think her apparent inaccessibility was due to some pathology, rather than being a characteristic of the very famous? That made them assume she had nothing better to do with her time than apply herself to building up their career, answering their patronising queries, or reading their manuscripts? That she would be pleased to answer the door to unannounced visitors and invite them in and bare her soul to someone who had clearly prejudged her anyway?

That an awkward meeting was due more to the anxiety and clumsiness of the supplicant?

I suppose I was particularly angered by this stupid anecdote because I was named as one of the supposed gatekeepers guarding and "ushering" Frame. Hilariously, the usher/bouncer on the other side of Janet was named as her friend poet Ruth Dallas. Those in the know would immediately realise that when Janet and Ruth went arm-in-arm in public it was because of Ruth's near-blindness, and she was being guided, not because Janet was being guarded!

Anyway, how many friends and bouncers and gatekeepers and colleagues that you socialise with happily do you need to have before you cease being defined as "reclusive"?

Because at these mayoral receptions Janet mixed and joked and chatted with numerous people:

Mayor Sukhi Turner (they liked each other very much, I heard them both say), with Michael King, with Ruth and her niece Joan, with Cilla McQueen and her mum who sat next to Janet (elderly ladies not being so keen on bouncing around the room); with poets Peter Olds and David Eggleton, journalist John Gibb, with old friend Hone Tuwhare, with archivist Stuart Strachan and academic Jocelyn Harris, friend and photographer Reg Graham (who took the above photo) and his wife Judith, Ted Middleton and Cynthia, and these are just the people I recall chatting with Janet.

And of course Janet had her own entourage, as celebrities do (especially those who attract stalkers as she did) consisting of several family and close friends. But it's not just celebrities who go out and about with friends. Treasured elderly ladies, if they're lucky, usually have some family along with them.

If Frame was alone and spoke to nobody, I could get calling her "reclusive". If she didn't actually make an appearance, then reclusiviness could also could be an inference. But it's hard to imagine how Janet Frame could have been less "reclusive" in her last years in Dunedin. She frequently hosted gatherings at her favourite restaurants and cafes around town, the guests including family and friends and a constant stream of colleagues and out of town visitors. She attended launches and talks and art gallery openings, film festivals, concerts and dance performances. She made new friends in those years, and managed her many existing relationships, and renewed and deepened some of her former South Island contacts.

Myth is so powerful that it prevents some people from interpreting the evidence of their own eyes. They would rather ignore the truth in front of them, than lose the comfort of the story they have acquired culturally, especially because those legends are so internally consistent, so symmetrical, so unlike real life which is much more unpredictable and untidy, and which does allow for a real mystery, a mystery that cannot be glibly "unravelled".
Posted by Pamela Gordon