NZ poetry in the Frame 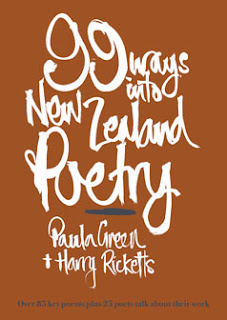 A fascinating new survey and analysis of New Zealand poetry has just been published:


Reviewed by Elizabeth Smither in the Sunday Star-Times


It's a big, heavy book, full of marvellous essays and useful insights, thoughtful contributions from many of the poets, and a generous supply of photographs and book cover images, and dozens of full poems to accompany the explanatory text.


There is of course, a showing from Janet Frame in this book. One of her poems was chosen by the editors to illustrate "Sound" poetry. Also her commercial success as a poet is considered under the heading of "Popular Poets" (there is a statement - rather an understatement - that her posthumous collection The Goose Bath sold 3,000 copies which in New Zealand merits a "gold" sales status. In fact it sold many more). Because of the evidence for such strong sales, usually only connected with the populist and the pub bards, Frame must be grouped together with the other New Zealand commercially successful New Zealand poets. There's a suggestion that in Frame's case it's her fame as a novelist and a memoirist that attracts the reading public to her poetry publications, rather than any appeal - or compromise - on her part towards becoming a "people's poet."

I think that it's perhaps still too soon for Frame's contribution to NZ poetry, and her place in the hearts and minds of poetry readers here, to be fully recognised by the official discourses of academic commentators. In fact the academics tend to locate Frame's work as belonging to high culture and esoteric literary studies, and are often heard to claim her work is "difficult" - the inference being that only the highly educated can understand and engage with her; the popularity however, of her poetry, and the number of times her poems have been quoted over the years, for a range of popular culture purposes, would tend to contradict this proprietorial stance of the academy.

I was astonished once, while researching which poems from The Pocket Mirror had been adapted by musicians, or anthologised, or quoted in various contexts, to find that over half the poems from that book had found so much favour with the reading public and with other writers and artists that they had been moved to quote or adapt them. Often the "anthology" poem even of a major poet, is fairly easy to predict. Frame's extensive range of expression and subject matter makes her poetic oeuvre a rich and varied source of inspiration, and provides many choices from experimental, to lyrical, to ballads, to political protest, to the spare and perfect imagist poems, etc.

(The Frame oeuvre so far published, that is! As with many of the great poets, she has left a rich supply of poems for posterity to consider.)

Although Frame is frequently quoted for her self-deprecating comments about her own poetry, this angle is increasingly overdone, I feel. Poetry was central to her vision and to her practice, and she was adamant in declaiming her poems whenever she had the opportunity. Almost invariably when Frame gave an interview or a speech or a public reading (including at a prison!), attended a conference or festival, or did a recording, she chose to include a poetry reading as part of her contribution. Almost all her novels seamlessly interweave poetry with the prose. She wrote letters to the editor in poetry, and often included poems in letters to friends and acquaintances.

It's a little known fact that Janet Frame's first book of poetry, The Pocket Mirror (first published 1967) has sold over 10,000 copies across several editions in New Zealand alone.

Janet Frame's posthumous collection The Goose Bath (2006) has sold not 3,000, but nearly 5,000 copies in New Zealand, and the NZ paperback edition is still selling steadily after fresh reprints.

These above figures do not include the healthy international sales for Frame's poetry volumes published in the UK and the USA, and in Australia.

This indicates that there is more interest in Janet Frame's poetry than can be attributed to her fame as a novelist and memoirist.

As Listener reviewer Hugh Roberts said, prophetically, perhaps, about the The Goose Bath (The Stain of Words, 2006):

"This is a volume that alters the landscape of New Zealand poetry."

However there are not as many references to "Janet Frame" in the index at the end of 99 Ways, as there may seem at first sight. Unfortunately several of the index entries point merely to the prosaic word "frame" appearing in the text! Here are the phrases pointed to by the Frame, Janet index entry:

working class frame
a different frame
a regulated frame
the poetic frame
in this 'frame'
the frame of poetry
imposing a specific frame
the need to frame social issues
Now I call that "found poetry"...
Posted by Pamela Gordon