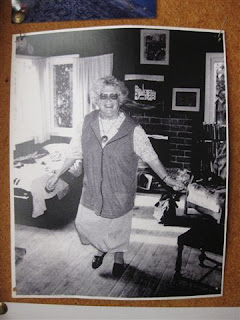 I recently visited Frank Sargeson's house at Takapuna, and took this photo of this photo pinned to the wall very near where the photo had been taken.

The photo, of course, is of the elderly but spry Janet Frame dancing on the floor of Frank's bach, on a return visit "to the scene of the crime" with her biographer Michael King, who took the photo.

Why do you think Janet is dancing? I wonder if Michael ever guessed?
Posted by Pamela Gordon

Would love to know, Pamela?

I can only guess at Janet's complex feelings, Brenton, but it looks to me as though there was an aspect of dancing on Frank's grave - with joy and love and perhaps a little triumph...