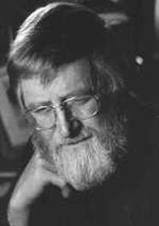 I'm sad to report that another one of Janet Frame's contemporaries, Ted Middleton, passed away recently, at the age of 85 years.
Here's an item from Dunedin's TV Channel 9 in which the executors for Charles Brasch and Janet Frame pay their tribute to Ted Middleton, on the day of his funeral, by reading from the recently published book Dear Charles Dear Janet. Charles and Janet refer in the excerpt to a new publication by their mutual friend Ted, a book of stories illustrated by Ralph Hotere.
Ted first met Janet when she was boarding with Frank Sargeson at his Takapuna home, and was one of many observers and acquaintances from that time who did not dine out on bizarre anecdotes about her so-called "odd" behaviour - alas the public hasn't yet heard so much from the reasonable ones! - Ted simply noted that when he first met her, she was shy, but pleasant.

Perhaps his clear perception was due to the fact that like Janet, Ted was firmly rooted in his allegiance to working class "rules" and so he didn't patronise her from a judgmental middle class perspective, just because she didn't conform to the norms society expected of women in the 1950s.
Ted was also a free spirit and a yearner after social justice.
Ted and Janet came to know each other better when they were both living in Dunedin, through their mutual friend Charles Brasch.
Rest in peace, Ted.
Posted by Pamela Gordon at 3:59 PM