Notes on the Limited Edition 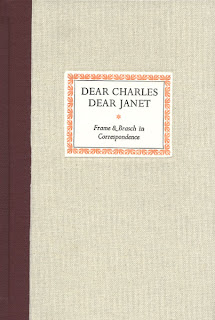 A reminder that if you want to obtain the fine edition of the above book, order details are available on the HOLLOWAY PRESS website.
Prominent NZ author Elizabeth Smither gave a most beautiful address at the launch, and Holloway Press publisher Peter Simpson also spoke.
I gave a brief talk also, on behalf of the editors (myself and Denis Harold) and the Frame estate.
Here are some of the notes I wrote towards my short speech:
Congratulations to everyone involved in producing this work of art.
In this day of e-books, digital files, audio books and mass production, print on demand, pirated editions, institutional photocopies, how wonderful it is to celebrate the art of the handmade book.
To my knowledge, this is Janet Frame's shortest print run (at 150 copies) and her highest retail price (at $250).
I know that Janet often yearned to have one of these fine editions, but how could she ever have managed, because her readership was too vast and her career on too broad a canvas. Publishers were always eagerly awaiting the next manuscript.
As it turns out, she didn't always hand her manuscripts on to them, but that's another story!
It is true to say, that from very early in her career, Frame's commercial potential was recognised, and her agents and publishers would likely never have allowed such a gratuitously non-commercial project as this, conceived purely for the beauty of the work and as a gesture of support for the art of the fine press, and as a tribute to the literary relationship between Janet Frame and Charles Brasch.
All that work for little economic return, compared to a standard main stream publication, but we're so glad to have been able to take part in and support this project, just for the love of the content and the form of the book.
Some people have expressed surprise at the evidence in this book for the obvious tenderness of the friendship that developed between Janet and Charles - both are generally regarded as reserved and solitary people - and although it was known that Charles Brasch was Janet's wealthy "patron", it was not widely known that he was also her friend.
So another nice thing from my perspective, about releasing this text, is that it will run counter to the popular impression that Janet Frame had nothing but "mentors" and "patrons". Everyone else in New Zealand literature, it seems, is allowed "friends" - but the myth of Janet Frame does not easily allow for the recognition that Janet did in fact had many close friendships. So her friends are commonly defined as "patrons" and "mentors", or defined as somebody else's friend rather than hers.
Charles was Janet's patron, but he never patronised her.
In this book you can hear Janet and Charles in conversation, in their own words, speaking for themselves. Please enjoy.