More on the launch

Text of a speech by Elizabeth Smither 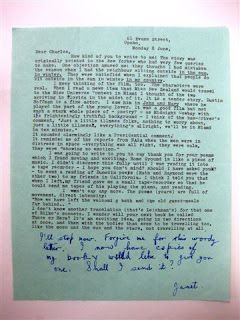 The volume includes facsimiles of an exchange of letters between Charles and Janet after the two friends had been to see Midnight Cowboy together in Dunedin on a Saturday night in June 1970.

These days we'd email or facebook or text our subsequent thoughts about such an encounter, but in the 60s and 70s it was not unusual to write to each other across town, putting a stamp on your letter and posting it! Charles wrote on the Sunday, thanking Janet for a gift she had given him, and mentioning that he was still thinking about the movie ("scenes from midnight Cowboy keep coming back to me"...) Janet replied the following day, giving her impressions of the movie (and of Dustin Hoffman).

Posted by Pamela Gordon at 2:44 PM