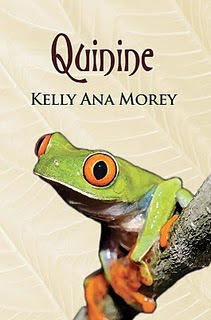 Reviewer Nicky Pellegrino made the claim last week that Quinine "has got to be in the running for next year's NZ Post Book Award".

I agree with Pellegrino's rave review. Quinine is a mature, confidently achieved novel with a very satisfying structure and an excellent, absorbing plot. Morey is mischievous in her manipulation of the historical genre with a fresh contemporary perspective. A postmodern Jane Austen. Morey stands out in the contemporary crop of NZ literary fiction writers, as one of the few who have the ability to present believable characters who come alive on the page, and who are interesting and who are capable of development (or deterioration). One tires of the ventriloquist/puppet syndrome being used to promote some theory or even the invention of unlikeable and wooden or insipid characters for the purpose of settling petty parochial scores. Even where one suspects in-jokes interposed into Morey's text, they're drawn into the narrative in credible ways. Such humour is also too rare a treat in this risk-averse publishing climate. Quinine is an enjoyable page turner, full of surprises and hidden levels, and as with all good literature, you come away from the experience having learnt something about life.

In other news from Janet Frame Fiction Award winners, Alison Wong's poetic novel As The Earth Turns Silver continues to receive critical and popular acclaim. It took out the top honours in this year's New Zealand Post Fiction Award, has been shortlisted for the Australian Prime Minister's Award, thus putting Wong on a list alongside the likes of JM Coetzee and David Malouf. The novel has also been ranked at number 42 on NZ book chain Whitcoull's Top 100, an astonishing feat for a first novel (and for a literary one, given that most of the top places are taken up by popular and genre titles), and continues to attract translation deals around the world.

Congratulations to Kelly Ana Morey and to Alison Wong, and we wish you all the best in your careers.
Posted by Pamela Gordon