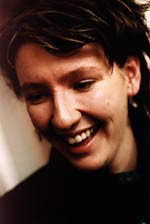 Warmest congratulations to Jo Randerson of Wellington, for being awarded an Arts Foundation of New Zealand New Generation Award for 2008, worth $25,000.
The multi-talented Jo Randerson is a poet, author, comedian, actor, director and playwright with seemingly boundless energy and creativity.
Jo has also been awarded the 2008-9 New Zealand Society of Authors Foxton Fellowship. The recipient of this fellowship is entitled to stay for a month at a writer's retreat house in Foxton owned by Peter and Dianne Beatson. The Beatsons also provide a stipend to the lucky author, so it's not surprising that from next year the fellowship will be renamed "The NZSA Beatsons Fellowship".
Jo was a Burns Fellow at the University of Otago in 2001 and attended the 50th anniversary celebrations held in Dunedin in October. She chaired a deeply moving tribute session to all the deceased Burns Fellows, in which their words and their memory came alive, causing many tears especially as 2008 has seen the loss of three dearly loved former Fellows who had all lived in Dunedin: Hone Tuwhare, Ruth Dallas and Dianne Pettis.
The memorial hour was called "Bright in Memory" and Jo gave an "introductory peroration" in which she listed and considered the treasury of New Zealand's departed literary heroes. Then she and her fellow panellists each gave an individual tribute to one fellow, by speaking about and reading from that author's work. Hone Tuwhare was commemorated by Cilla McQueen, James K Baxter by Brian Turner, Ruth Dallas by Bernadette Hall, and Dianne Pettis by Christine Johnston.

And Jo Randerson gave the tribute to Janet Frame. Jo told us that Janet Frame was the first writer that ever made her "shudder". Jo read out Janet Frame's marvellous fable "Two Sheep".

Janet Frame herself had also once chosen to read that same story out during her session at an author's festival, held in Toronto in 1984. While at the week-long festival Janet Frame also attended every one of the major sessions given by the other special guests (who included Margaret Attwood, Yevgeny Yevtuschenko, Nadine Gordimer and VS Naipaul).
And so the new generations are nourished by the words and the example of the great writers of the past who never really leave us, as their words stay as fresh and powerful on the page and in the ear, as the day they were written.
Posted by Pamela Gordon