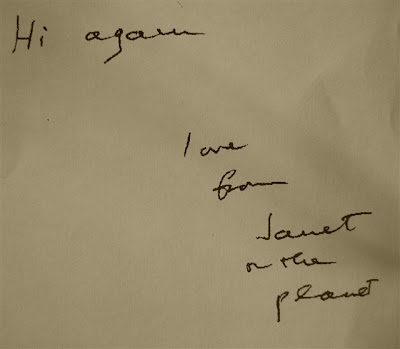 Today the name of this blog changes from SLIGHTLY FRAMOUS to JANET ON THE PLANET.
Why? Because the former is perhaps a little too subtle, and has been leading to some misinterpretations.

The new name is a name Janet used to sign herself, not to everybody she corresponded with I guess, but she used it when she wrote to me, and the copy above is taken from a fax she sent once.
I had been saving the expression 'Janet on the Planet' in case I ever got around to writing a memoir about my life with (and without) Janet Frame.
Just the other day while visiting Wellington, I was spending some time with my chum Roger Steele of Steele Roberts publishing, and he was the latest in a long line of people to ask whether I was working on a memoir.
No, I said, but I have got a blog.
I realised then that this blog is probably as close as I'll get in the meantime, to making a first pass at a memoir, so why not give it a name I like better, and one that Janet herself invented.
Posted by Pamela Gordon

I've had a query from Lili M, who wants to know: "What do you think Janet Frame meant with that expression? Do you have a good idea, or can you only guess? During what period of time did Janet Frame use this expression? Hope you don't mind the interrogation."

Janet Frame was a poet, Lili, and poets generally have a tendency to rhyme (as well as their facility for imaginative thought, for metaphor, etc). "Planet" is one of the few rhymes for "Janet". (Others are, 'gannet', 'pomegranate', and 'granite'. And of course there is the famous song "Dammit Janet", but that's not a true rhyme.)

Other than noting the word play, I can only guess, as can anyone else, 'why' people choose to represent themselves in varying ways. For instance your own online nickname, I suppose it 'means' something, or maybe it is just a name.

Janet sent me this fax when I had got a new fax machine and we were testing the connection, so it was just an exchange of "hi" "testing" "hi again" sort of messages, this one being "hi again" and with the playful sign-off such as one does with close friends. By the phone numbers I can date it to the late 1990s. If I were to guess, I'd say that "on the planet" (alive) would be contrasted with the alternative (no longer on the planet, ie dead) which was a prominent theme of her life throughout the mid and late 1990s. Janet was very aware of having escaped a death sentence a few years earlier when she was diagnosed with ovarian cancer and "given" only a few months to live. When after successful surgery she survived, she was tremendously affected by the reprieve, and aware of having evaded the grim reaper. I do think "on the planet" might refer to that special gratitude she had to be still alive. Or maybe she was aware that she was creating an archive that would be still around when she was no longer on the planet to answer the questions herself.