Dorothy Porter on The Goose Bath 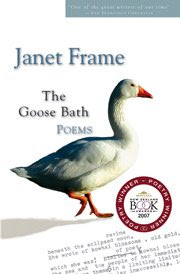 Australian poet Dorothy Porter died two weeks ago in Melbourne.
I've been told that the book she was reading, and rereading at the end, was her heavily annotated Australian edition of Janet Frame's The Goose Bath.
A few days after Dorothy Porter died her short review of The Goose Bath appeared in the Melbourne Age (December 13 2008). Apparently Porter, herself an exponent of the verse novel, had not been a fan of Frame's novels, but was awestruck by her poetry. She said:

"I am engrossed in her new and posthumous collection of poetry, The Goose Bath (Wilkins Farago). Frame kept many of these poems unpublished and private during her lifetime, and some of the poems can eerily make the reader feel a trespasser. Yet the poems are numinous and mostly memorable. The book itself is beautifully presented. A pleasure to hold and read."