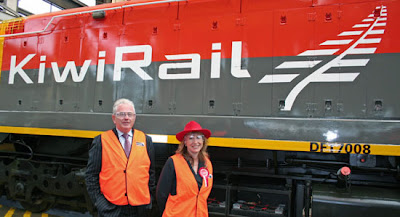 The new Labour MP for the Dunedin South electorate delivered her maiden speech in Parliament on December 16th. A first speech to parliament traditionally covers the new Member's personal journey into politics and outlines what they hope to achieve in their future career. Clare Curran also described and paid tribute to the electorate she now represents, including reference to some of the great New Zealanders that came from there. She said:

"Dunedin, particularly South Dunedin, can claim to have nurtured many of our most creative and talented people. Janet Frame, James K Baxter both hailed from Dunedin South along with a myriad of other writers, painters, poets, sportspeople and musicians."

Dunedin South includes the suburb of South Dunedin where Janet Frame's family was living when she was born. Her father was a railwayman and Janet never lost the sense of her origins in the working classes, and she never lost her love for the railways either.
At the end of her life, after all her early trauma, her travels and travails, and all her triumphs, she came back to live in South Dunedin just a few streets away from where her parents had lived when she was born.

Before being thrown out of office in the November 2008 election, New Zealand's Labour-led Government managed to carry out Janet Frame's dying wish that New Zealand would "buy back the railways".
Posted by Pamela Gordon