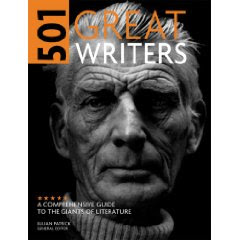 This one, 501 Great Writers (Penguin 2008) is glossed as:
"A COMPREHENSIVE GUIDE TO THE GIANTS OF LITERATURE"
This volume is itself a giant, and makes for some excellent browsing.
It is to be hoped that these books of lists of literary greats will not just stimulate debate, but that they will also encourage reading of the great writers and works they mention (and those they don't), rather than just serve as cheat-sheets.
There are just two New Zealand writers among the 501: Janet Frame and Katherine Mansfield.
Ever since Janet Frame came along, it has been harder and harder to justify the previous claim that Katherine Mansfield was "New Zealand's greatest writer". And conversely, because of Mansfield's reputation, many critics find themselves unwilling to claim the top spot for Frame.
The Mansfield entry in 501 Great Writers notes the competition without opting for a clear winner:

"Katherine Mansfield is acclaimed as one of English literature's finest short story writers and is rivaled only by novelist Janet Frame as New Zealand's greatest writer."

It's interesting that Mansfield and Frame both made their international reputations while living as expatriates. (Mansfield never returned to New Zealand, but Frame did.)
Posted by Pamela Gordon