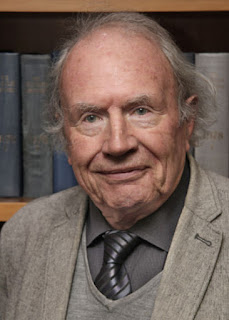 The Janet Frame Memorial Address is given annually by the current President of Honour of the New Zealand Society of Authors. The most recent lecture was delivered in Auckland by PEN stalwart Bernard Brown and you can listen online and learn everything you might want to know about the old guard of New Zealand Literature. Brown delivers a staccato supply of anecodotes, one liners and bon mots and a few mauvais mots thrown in, well-honed to evoke chuckles and giggles.

The caricature of Frame you hear in this speech is typical of the provincial NZ attitude towards her. She is (ironically) described as "small town surreal" despite being probably the most cosmopolitan of the prominent New Zealand writers, at home as she was in New York, London and San Francisco, where she set many of her novels. When someone describes Janet Frame as 'rural' or having a 'narrow focus' then you can be sure they are not at all familiar with the scope of her work as it has, for instance been commended by the American Academy of Arts and Letters. You hear Frame praised in this speech, sure, but you also hear the stories in her first collection described patronisingly as 'little gremlins' that were allegedly given masterful midwifery by Frank Sargeson. Not true actually - Sargeson came on board much later, while Frame was writing her second book, after she had already made her name with her first book, and Frame never allowed Sargeson anywhere near her actual writing. What she learned from Frank was about the discipline of the daily life of the writer.

Another fallacy I haven't heard before is the suggestion that personnel from P.E.N. contacted Seacliff Hospital in 1952 to let them know that one of their inmates had won a literary prize, thus being responsible for her escape from imminent brain surgery. In fact Frame's doctor at Seacliff read a report in the local newspaper just days before her lobotomy was scheduled. Nobody except fate intervened - not someone from P.E.N., not Frame's family, not even Janet Frame's friend John Money who by then was in the USA. The press release describes Janet Frame as an Auckland resident, evidence for the fact that P.E.N. officials did not even  know that Frame had returned to Dunedin and was back at Seacliff Hospital. Her writing, and the prize it attracted, did save her, so we can think of the judges as partly responsible for her reprieve. They recognized the worth of her writing. But they did not step in to save Frame as Bernard Brown claims in this speech. It might be interesting to try to track down where this story has came from. Or not. I have heard various versions of Frame's reprieve: one has John Money holding a scalpel over her head and then having a mystical illumination and deciding to let her be. Another has the surgeon (in some stories it is a woman doctor) holding the scalpel and John Money barges his way into the room and wrests the knife away. 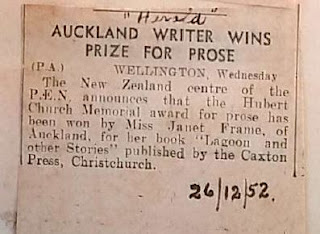 New Zealand Herald, Friday 26 December 1952
Clipping kept by Janet Frame's cousin May Williamson
(With thanks to May Williamson's family)


Still, it's probably unfair to listen in to the after-dinner-speech genre after the fact and without the benefit of the lubrication provided on the night. In the cold light of day, the gossip and the dog whistles and the in-jokes don't sound quite as charming as they do when delivered to an admiring crowd of old friends and colleagues who know the drill, and know when to snigger and when to guffaw or gasp.

Many of Bernard Brown's anecdotes were amusing and I thought he made some valid points, especially about the opposition to Trump and about the responsibility of satire to target issues rather than personalities. I did agree with him when he railed against "the simperingly uncritical reviewing" to be found in the weekend papers. "It's a problem," he said, and I concur. Croneyism on the one hand and score-settling on the other are helping to destroy the confidence of the public in our literary institutions and awards. Good books are overlooked and bad books are lionised for the wrong reasons, nothing to do with the worth of the writing.

Here's a link to the recording and transcript (in preparation).