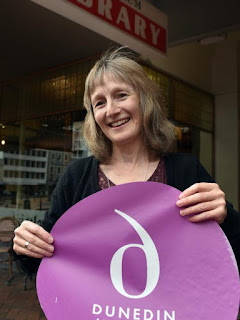 Earlier this year, thanks largely to the initiative and enthusiasm of Nicky Page, who has been appointed as Director City of Literature, Dunedin was awarded a free stand at the Bologna Children's Book Fair in Italy after a successful bid.

Nicky Page said “Winning the stand means we were able to showcase our wonderful local writers and illustrators and provide a hub for New Zealand children’s books at a trade fair that attracts tens of thousands of publishing industry players worldwide.”

Nicky worked with a team of people to put together a stall at short notice and send the material in time for the fair. A great effort by all!

Three books by Janet Frame that were suitable for children or YA readers were included in the contingent sent to Bologna: Owls Do Cry, the edition of Mona Minim and the Smell of the Sun illustrated by Dunedin artist David Elliot, and The Mijo Tree, illustrated by Deidre Copeland.

The Dunedin stand was packed with 80 books from around New Zealand as well as Dunedin. After the fair the Dunedin books were donated to the famous International Youth Library in Munich.

Dunedin YA novelist Ella West attended the fair and has filed an excellent report for childrens' literature website The Sapling.
Posted by Pamela Gordon