A Bellbird Sang in Melbourne Street


Just in time for Christmas comes another of the themed literary anthologies that Penguin Random House New Zealand does so well. Bird Words: New Zealand Writers on Birds comes in a Vintage imprint, hardbound with a pretty cover and a golden ribbon.
The selection is fresh and interesting, covering a wide range of the best Kiwi poetry and fiction and non-fiction writers of past and present. There is also a useful section of author biographies at the back of the book. Janet Frame's bio includes her famous resolution that her poetic 'imagination' need not be imported from the other side of the world: "I refused to accept that if I were to fulfil my secret ambition to be a poet, I should spend my imaginative life among the nightingales instead of among the wax-eyes and the fantails."

There is a short story by Janet Frame in the collection, as well as an excerpt from the text of the eulogy Michael King delivered at her Memorial Service. The title of this blog post appears in that tribute. Melbourne Street is in South Dunedin where Janet Frame lived for a while when she returned to Dunedin in the late 1990s. 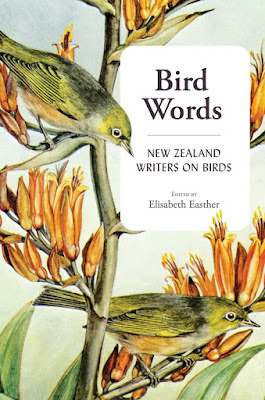 
Why do we love birds so? Perhaps we can turn to Michael King's Janet and the Birds, an extract from The Silence Beyond: Selected Writings compiled by his daughter Rachael King in 2011. King and Janet Frame, both mortally ill, are discussing the implications of a morepork staring through the window of a house King was visiting, a portent, they believe, of death.
But King had left the room. "The owl came looking for you. And you weren't there. That might mean you're reprieved," she tells him.
Sadly, both are no longer with us. But the inclusion of their writing - Frame's The Birds Began to Sing is also in this collection - is one of the many reasons Bird Words sings so directly to the heart.