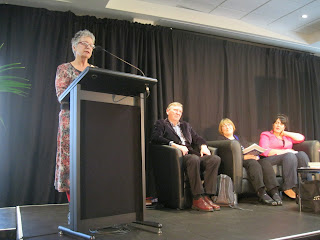 Bernadette Hall, Owen Marshall, Pamela Gordon, Tusiata Avia
Photo: Christchurch City Libraries
It's nearly Janet Frame's birthday again (she was born on the 28th of August 1924) and every year her estate marks the date in some meaningful way. Janet Frame was very much 'into' birthdays and special occasions. 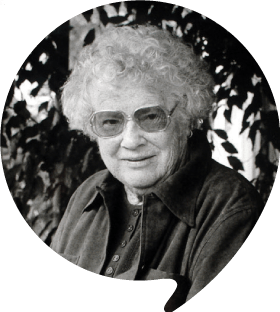 I've been thinking about our celebrations for her birthday last year. A big highlight was the tribute event 'Happy Birthday, Janet' held by the WORD Christchurch Writers and Readers Festival. The Director of the Christchurch Festival Rachael King and her committee invited me to pay tribute to Janet's life and work on her 90th Birthday, along with three Canterbury writers - Tusiata Avia, Bernadette Hall and Owen Marshall - by reading favourite pieces from Janet's work and speaking briefly about what her writing had meant for us.
It was an enlightening and varied session. The timing was incredibly difficult for me as I had just that week attended my brother's funeral. Fortunately the writing of Janet Frame offers much to sustain those grappling with grief - it's a subject she knew well and explored deeply.
Here is a link to a report of the session posted on the Christchurch City Libraries Blog.