Janet Frame's first American publisher George Braziller has just published a memoir - at the age of 99! 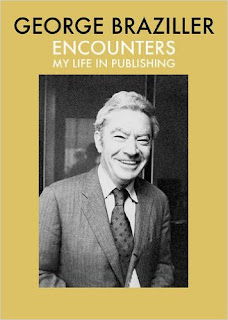 Encounters: My Life in Publishing by George Braziller (2015)


My copy arrived this week and I have enjoyed perusing George's tantalisingly brief vignettes about some of the many fascinating people he has met over a long career, and the books he has published as a legendary New York Independent publisher.

I last met George in person in the year 2000 when I accompanied my aunt Janet Frame on a month-long trip to the United States. We had a marvellous time at some of George's favourite haunts in New York and on Long Island. He and Janet were very fond of each other and they made the most of what turned out to be their last few outings together. They were clearly very comfortable in each other's company and had a long history and friendship. On one poignant occasion the three of us went for a walk along the beautiful and wild Sagaponack Beach, that might seem like an isolated New Zealand beach were it not for the sight of the roofs of the huge mansions located behind the sand dunes.

George and Janet found a sunny sheltered spot where they sat down next to each other on the sand against a wind break fence, talking and reminiscing, and I went down to the seashore for my first encounter with the Atlantic Ocean. The water was dark and blue and cold, and I strolled along and stared at it for a long time before returning to the two old friends, who had peacefully fallen asleep leaning against each other while also looking out at the ocean.

Time spent with George always involved listening to his fascinating anecdotes about some of the very famous people he had known. I remember Janet and I both exhorted him to write his memoirs to get those stories down on paper. He didn't see then how he could find the time (he was still - in his late 80s - very involved in the running of his publishing firm), and he was also diffident about his skill as a story teller on paper, so it's good to know that he has finally been persuaded to produce this record of his own life.

There are a couple of pages about Janet Frame in the memoir, naturally, including the well known story about George's fortuitous rescue of Janet's first novel Owls Do Cry from his 'slush pile'. He read the battered copy of her New Zealand-published novel on a whim, and was from then on smitten with her writing and determined to publish her work in America.

Of course from the New York perspective, Janet Frame's book in the slush pile was an 'unsolicited manuscript' (having been sent by Janet Frame's London literary agent Patience Ross of A.M. Heath via their New York sub-agent Carl Brandt); but the text George read was a highly acclaimed work already regarded by many as 'The Great New Zealand Novel', that was also soon to be published in the UK and Germany. But the USA was a hard place for a writer from the 'colonies' to break into (still is!), and it was a combination of luck and Braziller's impeccable taste in literature, that first introduced Janet Frame to her American readership.

Janet was always grateful for George's faithfulness and belief in her work, although their long professional relationship was not without its tensions: Janet had complaints to make, that George notes were always on "green paper", while those letters on white or pink paper were more friendly:


"I was always on guard when letters on green paper arrived."

This colour coding is easily explained by anyone who understands that Janet Frame used green paper for her writing work; it was a habit she had acquired from Frank Sargeson who believed that the green hue was easier on the eyes for extended typing periods. So Janet's work letters - that might include her protests about the many typographical errors in Braziller's editions or the poor distribution of her books - were typed on green paper. The friendlier messages came on white or pink paper because they were not strictly work-associated. 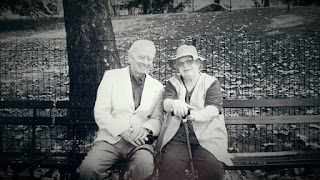