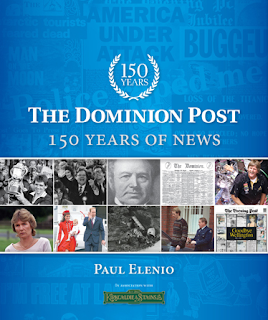 Wellington newspaper The Dominion Post is celebrating the 150th anniversary of its founding paper The Evening Post by publishing a commemorative volume (pictured).
One of the items in the book concerns the staging of New Zealand's first International Arts Festival in Wellington in 1986. The programme included a Readers and Writers Week attended by Janet Frame who is quoted by the paper as saying:
"It's marvellous, it's fast and furious but it probably can't all be absorbed. You take in as much as you can then go home and dilute it like a soft drink."
~ Janet Frame (at the Wellington Arts Festival, 1986)
At the Arts Festival Janet Frame read to a crowd of 2000 people, and was given a standing ovation:
"The festival performance, like her appearance at the Christchurch Festival two years before, was a considerable success. ‘Some 2000 people turned up to hear Frame read [from Intensive Care], a task she had not relished, but accomplished with great style and expression,’ the New Zealand Listener reported. Every seat in the spacious Renouf Foyer at the Michael Fowler Centre was taken, and additional patrons lined the walls two or three feet deep. Again, she took conﬁdence from a good performance, and from the standing ovation that it produced."
(Michael King, Wrestling with the Angel: A Life of Janet Frame)
(NB: Janet Frame's use of the idiomatic expression "fast and furious" preceded the first film in the mega-famous car racing movie franchise The Fast and the Furious (2001) by five years. Arguably that particular expression has these days become inextricably bound up with the Fast & Furious pop culture phenomenon.)
Posted by Pamela Gordon