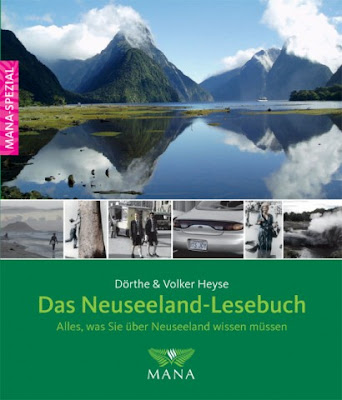 Das Neuseeland-Lesebuch (2012)
German Publisher Mana Verlag
New Zealand is the honoured guest this year at the Frankfurt Book Fair and what a lot of activity there has been around promoting not just NZ publishing to Germany, but New Zealand itself! (Our food, our unique culture, our film industry, our wine, and our tourism...)

For more information on the ferment of cultural and literary exchange, visit the New Zealand @ Frankfurt web site.

This is also a marvellous opportunity to promote New Zealand writing and writers on an overseas stage, and what great news it is to hear that a record number of New Zealand titles are to be translated into German this year, and across a much wider range of genres than is normally represented.

Three of the NZ books to be published in German translation this year are by Janet Frame (Towards Another Summer, Owls Do Cry, and An Angel at My Table). All three of these are new editions of works already published in Germany in the past. Janet Frame's work has undergone since 1961 quite a few publishing cycles in Germany, but there is definitely an extra buzz thanks to Frankfurt, and there will be a special publication of a boxed set to coincide with the fair: 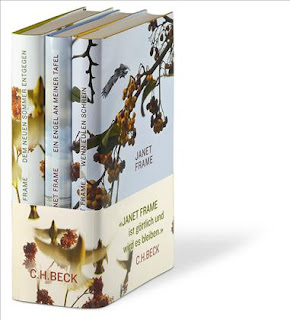 
Another delightful boxed set of New Zealand works will be published by German publisher Mana Verlag which specialises in works about and from Australasia and the Pacific. Authors include Robert Sullivan, Philip Temple, Chad Taylor and Heretaunga Pat Baker. 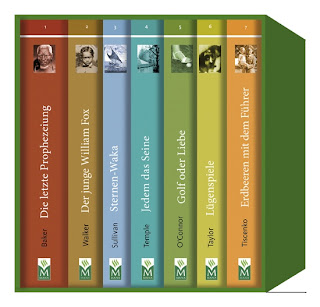 * 'Distance looks our way' is a quote from NZ poet Charles Brasch.
**  The guide book pictured above this post includes a chapter on NZ literature and art, with an illustrated passage about Janet Frame
Posted by Pamela Gordon