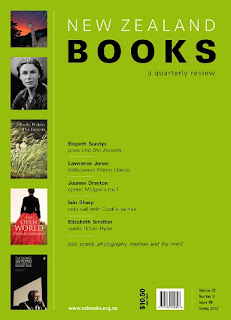 The latest issue of New Zealand Books is out (Vol 22 No 3, Issue 99, Spring 2012) and it contains a thoughtful and scholarly review of Gorse is Not People by Emeritus Professor Lawrence Jones. He clearly has relished getting to know "this fascinating collection" of stories which are "welcome additions to Frame's oeuvre". Lawrence Jones is of course very familiar with the background of some of the 'once feared lost' stories and is 'gratified' to discover that they have in fact been preserved by Frame. His review has the flavour of an academic introduction; he selects a few stories for closer analysis and in some cases for an exposition of their chequered history. He considers, for example, the first (and last) piece of work that Janet Frame ever showed Frank Sargeson:

Another outstanding early story printed for the first time in the collection is 'An Electric Blanket', the story that Frame in An Angel at My Table reported as having shown to Frank Sargeson when she was staying with him in 1955 and which he condescendingly told her was "quite good of its kind" -- but it is much better than that.

I was particularly interested to read the meaty paragraph in which Prof Jones considers the ramifications for the Eng Lit classroom of the story "A Letter from Mrs John Edward Harroway", which acts as a postmodern coda to one of Frame's best-known stories 'The Bath':


At the same time the speaker's request to the writer "to tell the truth and not invent things" is a naive wish contradicting what Frame herself knew to be true -- that even her most experience-based and/or autobiographical stories inevitably involve invention.