A whale of a tale 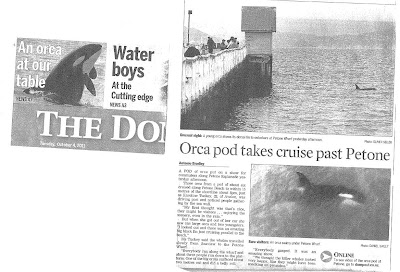 Yesterday morning's Dominion Post (Wellington, NZ) featured a front page teaser for an inside story about a rare visit of a pod of orcas into Wellington harbour. Above the paper's banner was a picture of a killer whale superimposed with the words:


An orca at our table
Nice to see the old catchphrase an x at y's table (from Janet Frame's An Angel at My Table, adapted for the celebrated movie by Jane Campion) still at use in New Zealand idiom. (See my earlier blog posts 'A catchphrase on my candle' and 'A bro'Town at my table'.)

What made this particular showing of the expression especially noteworthy for me, is that the person who captured the mobile phone footage of the orcas in the harbour, was a close member of Janet Frame's family circle (namely my son Daniel). When the paper came out the next day and we saw the "An orca at our table" I asked Daniel, "Did they know that Janet was your great aunt?" and his answer was No - just a random coincidence.

Janet Frame wrote a delightful poem called 'Daniel' (it has been published in The Goose Bath), that starts:

She could have been prophesying the socially networked mobile phone generation!