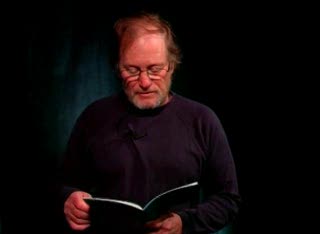 News from Janet Frame Literary Trust Award recipients.
In 2005 Peter Olds was the inaugural recipient of the Janet Frame Literary Trust Award for Poetry.
Here are some of his latest publications:
Poetry Reading at Kaka Point (Steele Roberts, 2006)
In the Dragon Cafe (Kilmog Press, 2007)
Graffiti (Earl of Seacliff Art Workshop, 2009)
Ballad of the Last Cold Pie (Cold Hub Press, 2010)
As well as keeping busy performing and publishing, Peter Olds has taken part in some artist/poet collaborations. He is pictured below with sculptor Peter Nicholls at their 2009 public installation at the former Tepid Baths in Dunedin. Photo: Jane Dawber, Otago Daily Times, 13 June 2009
Peter Olds was the University of Otago Robert Burns Fellow in 1978 and he recently returned to the Otago campus to work with the 2011 Printer in Residence John Denny on the production of a fine hand printed edition of poems featuring images by well-known artist Kathryn Madill. The book is called Skew-Whiff and was recently published by Otakou Press. 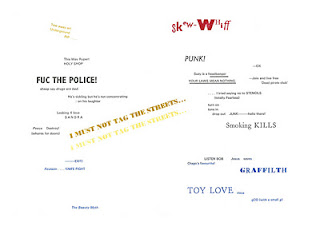 Centrefold of Skew-Whiff, based on graffiti observed on Dunedin streets
Photo of Peter Olds: Channel 9
Posted by Pamela Gordon

Peter is one of my favourite poets.Look forward to viewing the book at the library.All the best to Mr.Tedeschi as well. Best regards,Burny Brosnan