An editor at her table 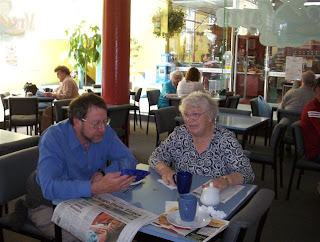 Denis Harold and Janet Frame snapped in conversation at a Dunedin cafe (2003)
Denis Harold was a close friend of Janet Frame's and was named by her as an executor of her will. In 1999 she appointed him as one of the four founding trustees of the Janet Frame Literary Trust.
Denis was raised in Taranaki and has travelled extensively. He now lives on Dunedin's Otago Peninsula. He has worked as a journalist, English teacher, bookseller, researcher and editor. He has an MA (Distinction) in English. He co-edited two previous volumes for the Frame estate: The Goose Bath (Vintage 2006) and Dear Charles, Dear Janet: Frame and Brasch in Correspondence (Holloway Press 2010).
Notable among Denis Harold's other publications is Maori Prisoners of War in Dunedin 1869 - 1872: Deaths and Burials and Survivors (Hexagon 2000) recently name checked in Witi Ihimaera's new novel The Parihaka Woman. 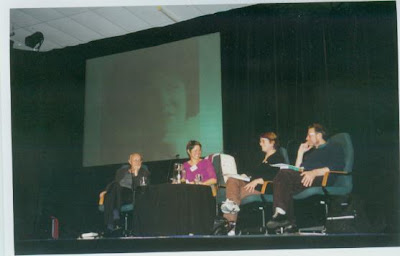 Denis Harold (nearest the camera) appears on a panel
on the theme of Janet Frame's poetry
chaired by Jan Kemp (second from left)
at Auckland's Going West Literary Festival
in September 2004
Posted by Pamela Gordon at 10:12 PM