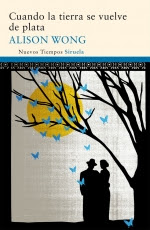 Recipient of the 2009 Janet Frame Literary Trust Award for fiction, Alison Wong, has picked up many honours for her first novel As the Earth Turns Silver. This historical novel giving insight into the experience of early Chinese New Zealanders won the New Zealand Post Book Awards Fiction prize in 2010 and was also shortlisted for the 2010 Australian Prime Minister’s Literary Awards, and it was longlisted for the 2011 International IMPAC Dublin Literary Award. As the Earth Turns Silver has already been translated into several languages, and continues to feature on local bestseller lists and has been further distinguished by winning funds under Creative New Zealand's new Translation Grant Scheme for a Spanish translation Cuando la tierra se vuelve de plata - which is published by Ediciones Siruela.

‘Wong excels at exploring how prejudice and acceptance are passed down through generations, while her keen ear for accents invariably entertains. Wong’s prose is lean and muscular, and her chapters short, making this an easily engaging read.’ Daily Mail

‘Robust yet delicately told…Wong has a good story to tell, and releases the information slowly; the narrative is brilliantly plotted…there is an unusual intelligence about this subtle, crafted novel that forces one to stop and absorb the enormity of the smallest gesture.’ The Irish Times