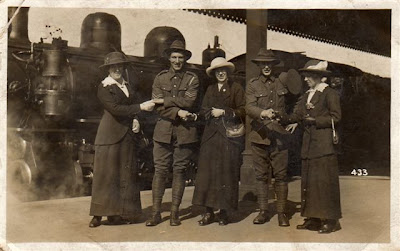 WW1: soldiers leave for the war in Europe
(A Frame family farewell at Dunedin Railway Station)
Janet Frame on the outbreak of the Second World War:

"Had I been a city, the shock of war would have torn apart all buildings, entombing the population, or as after a volcanic eruption there might have been an overflow of numbness, like lava, preserving all in a stone mask of stillness and silence. I had never felt so shocked, so unreal. I knew that war happened in history and in places far away, in other nations; that my father had ‘been to war’; that some of the stories I most loved featured young soldiers ‘on their way to the wars’ or wounded old soldiers coming ‘home from the wars’. I had relished Miss Lindsay’s reading of ‘Ode on the Death of the Duke of Wellington’ and the battles of the time of Arthur: ‘So all day long the noise of battle rolled . . .’ And year after year in the School Journal I had read:

In Flanders field the poppies blow
Between the crosses, row on row
That mark our place; and in the sky
The larks, still bravely singing, fly
Scarce heard amid the guns below . . .

In the Anzac Commemoration at the Waitaki Boys’ High School Hall of Memories I had heard Mr Milner proclaiming the British Empire’s glorious deeds in battle and sung, feelingly, without translation of the scene into one of undue horror:

O Valiant Hearts, who to your glory came
Through dust of conflict and through the battle-flame;
Tranquil you lie, your knightly virtue proved,
Your memory hallowed in the Land you loved . . .

I knew of the pacifist belief of Mother’s religion, that two of her brothers had been conscientious objectors in the First War and imprisoned for their refusal to kill. I tried to imagine the people I knew in Oamaru – the Walsh boys, the Easton boys, the Luxons, even Jack Dixon, becoming characters in this new story and with knapsack or kit bag setting out cheerfully for the war. I had honestly believed that the days of war were over."
Posted by Pamela Gordon