For Bill on his birthday 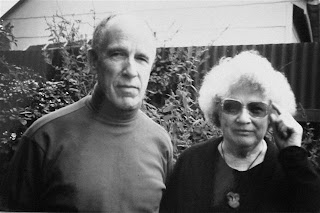 Bill Brown and Janet Frame, April 17th 1992, Palmerston North
I took this photo in Janet's back yard in Palmerston North at Dahlia Street. I was staying with her for several months while she was recovering from surgery for ovarian cancer.
Her dear friend Bill had come for a visit from the States to spend time with her.﻿
There's Janet giving instructions about where to find the button on the camera.
Posted by Pamela Gordon at 8:16 PM