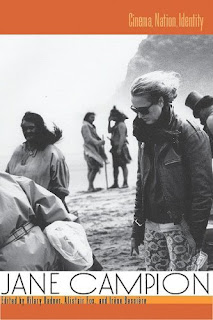 "We were busy converting her fiction into our fiction"
- Bridget Ikin
cited in:
Jane Campion: Cinema Nation Identity
Film producer Bridget Ikin is describing above the process of adapting Janet Frame's autobiography into Jane Campion's movie AN ANGEL AT MY TABLE. It is interesting that Ikin refers to Frame's autobiography of her early life as 'fiction', when Frame herself insisted that she had told the truth of her life in the three volumes of autobiography. Frame admitted that as a novelist, she used her skills as a fiction writer to tell her story (only until the age of forty), but she didn't invent any of it. Her raw material was her life, which she turned into 'literature' not 'fiction'. A rare achievement.
In any case, the Ikin quote is a very good piece of evidence that the movie version of Janet Frame's life was deliberately fictionalised by its makers. The attitude that Frame's autobiography was 'fiction' must surely have informed the additions and omissions and exaggerations that made up the final filmic masterpiece.
Certain scenes were invented by the film makers and Frame also reluctantly granted them permission to use scenes from her actual fiction, as they insisted they needed them. Frame was afraid that the invented scenes in the movie would lead viewers to believe these things were true about her in real life, and so she was proved correct.
One of the aspects of the film that Frame complained about was that the reasons for her sadness at various times in her life were left out; therefore giving the audience no sense of WHY Frame is so alone, or so distressed on occasion. The viewers then must assume that Frame's unhappiness is congenital and endogenous and they use this belief about the ten unhappy years before Frame found her place in the world as a professional writer, to characterise the other seventy years of her life.
Another significant aspect of Frame that is downplayed in the film is her career as a writer - her ambition, her determination, and her success.
So again, a caution not to read this very beautiful and inspiring film as a documentary of Frame's life. Best to actually read the autobiography and think about the differences between the book and the movie...
Certainly AN ANGEL AT MY TABLE (the book and the movie) is in my opinion a not very common example of a great book leading to a great movie. And the success of the movie is partly because the filmmakers were not constrained to be too realistic.
Posted by Pamela Gordon at 6:16 PM