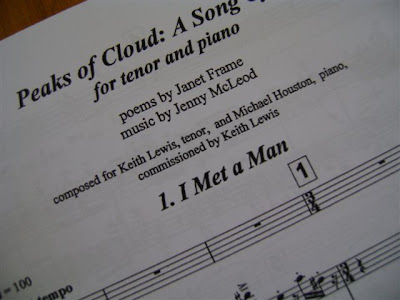 New Zealand composer Jenny McLeod speaks to Eva Radich for Radio New Zealand Concert, about her journey through setting Janet Frame's poems to music for the song cycle Peaks of Cloud commissioned by tenor Keith Lewis:
Upbeat (Audio download 18.44) Thursday 4th March
This is a fascinating conversation touching on the ways in which talented artists can collaborate with other artists working in different fields. Jenny McLeod is frank and articulate about her interactions with Frame's poetry and her experiences in setting it for Keith Lewis's voice and Michael Houstoun's piano playing.
Jenny McLeod's love for Janet Frame's poetry (from the books The Goose Bath and The Pocket Mirror) really shines through this interview. After completing Peaks of Cloud, McLeod went on to compose another two song cycles based on poems by Janet Frame.
The world premiere of Peaks of Cloud takes place in Wellington on the evening of Sunday 7th March 2010 as part of the New Zealand International Arts Festival:
Peaks of Cloud
Keith Lewis (tenor)
Michael Houstoun (pianist)
Posted by Pamela Gordon at 2:16 PM