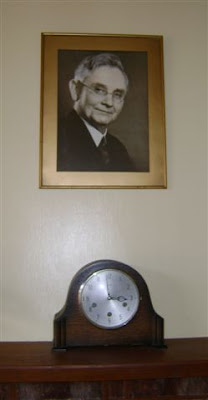 A portrait of kindly Michael Joseph Savage has pride of place over the mantelpiece at Janet Frame's childhood home (56 Eden Street, Oamaru, New Zealand) just as it did when she lived there in the 1930s. The Labour Prime Minister was a hero to Janet Frame's parents, especially for his government's progressive health care policies.
"When the Social Security Act was finally passed, Dad, in a spontaneous dance of delight in which the family joined, removed the [medical] bills from behind the clock and taking the poker from its hook by the stove, lifted the cover and thrust all the bills into the fire."
(From Janet Frame's Autobiography)
Posted by Pamela Gordon at 4:11 PM