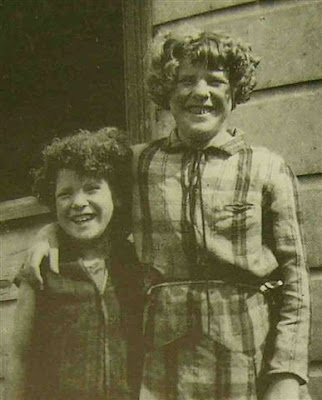 Janet Frame's sister Myrtle Frame died accidentally on the 5th of March 1937.
She drowned in the Oamaru public baths, at the age of 16.
Janet was only 12 years old at the time:
"I began to explore the poetry book, and to my amazement I discovered that many of the poets knew about Myrtle's death and how strange it was without her... 'The Lost Mate' from Sea Drift by Walt Whitman, told everything I was feeling - the two mocking birds, the disappearance of one, the long search by its mate, with all the false alarms and pondered might-have-beens, the anger and regret and the desperate reasoning that enlisted the help of magic, ending in the failure to find what was lost and the letting go of all hope of finding it."
From To the Is-land (Autobiography Volume 1)
Posted by Pamela Gordon

So sad when Myrtle died x