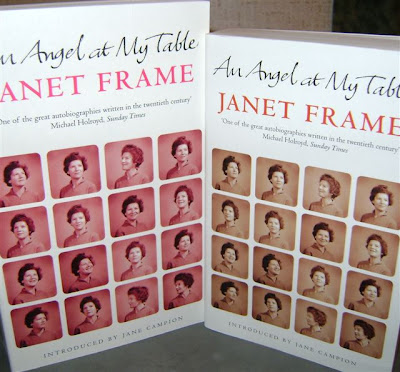 Janet Frame has 3 titles so far in Virago Modern Classics:

Faces in the Water - Introduced by Hilary Mantel

Living in the Maniototo - Introduced by Linda Grant

An Angel at My Table - Introduced by Jane Campion

And of course the posthumously published novel Towards Another Summer is also on the Virago fiction list as a new title.

Blogger Verity's Virago Venture has noted the arrival of the new edition of Janet Frame's autobiography to her home library.

The VMC Angel at My Table was first released two years ago (January 2008).

Today in the UK Virago Press has just released a B-Format paperback version of that earlier edition. The new edition also contains all three volumes of Janet Frame's bestselling autobiography, described by Michael Holroyd as "one of the great autobiographies written in the twentieth century". The new edition also contains a very personal introduction written by one of Janet Frame's biggest fans: film director Jane Campion, who memorably transformed Janet Frame's memoir into the highly acclaimed beautiful and poetic movie adaptation of the same name.

In line with the practices of the publishing industry, a new book is first published in hard covers (although that step is not as common these days as it used to be); then after the first flush of sales of the prestige and more expensive edition, it is released in a large format paperback, and then when that edition has been through several reprints, if sales are good enough the publisher releases a smaller and cheaper "mass market" paperback or "pocket" edition, in order to make the title available to a wider audience. Janet Frame's titles, most of which have been almost continually in print somewhere in the world since first publication, have been through many of these cycles!

Book collectors have their work cut out for them, trying to keep up with all the different versions of the one literary work. But the ordinary reader, and students, should I imagine be pleased to see an affordable and easily portable version of this classic autobiography on the market. This is the type of book you find at airport bookstores. (Friends of mine recently travelled through Hong Kong and mentioned seeing the row of Virago Janet Frames on the shelves at an airport bookstall.)

NB: The Virago titles are for sale in the UK and Canada, and in the Commonwealth except for Australia and New Zealand where Janet Frame is published by Random House.

Posted by Pamela Gordon at 8:02 PM

IO would love to read some Janet Frame. I have never understood why books are always published in hardback first...

thank you for sharing - you reminded me of this author

Thank you for the link! I'm really glad that Virago have included her in their series as I might not have come across her otherwise.