Now for the good news 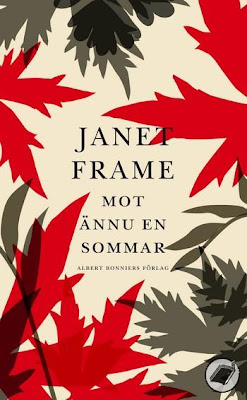 The mail today brought some lovely hardback copies hot off the press, of the Swedish translation of Towards Another Summer, Mot Annu en Sommar published by Albert Bonniers Forlag.
It's a beautiful novel that has led some people to believe is a delicate and sensitive portrayal of an autist's inner life. Others think of it as a crystalline insight into the complexity of the brilliant artist's inner life as she struggles to adapt in an unfeeling world. Others take the novel as a simple meditation on homesickness and the loneliness of the expatriate. Frame uses a weekend spent with near-strangers as a metaphor for living in a foreign country. In both cases one doesn't yet know the acceptable cultural norms and despite all goodwill, can never settle and feel at home as one does with one's own close family and in one's homeland. Other readers have adopted a social class analysis for the discomfort of the protagonist - by pointing out the wry and humorous descriptions Frame works into the text, of a working class fish out of water who finds herself at odds with the upper middle class environment her literary fame has propelled her into. Yet others just enjoy the exquisite writing for its incisive and deep portrayal of human nature, of the minutiae of social interaction, and for its sometimes virtuoso descriptions of the natural environment.
Posted by Pamela Gordon