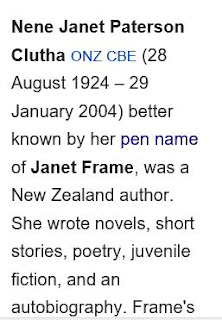 Where are they getting this rubbish from?

I went to have a look at Wikipedia. Yep, that is where they are getting it from.

Some ignorant know-nothing know-it-all put it there.

Janet Frame was born Janet Paterson Frame in 1924 and for her whole life she used the name Janet Frame for her writing.

In 1958 she changed her name by deed poll to 'Nene Janet Paterson Clutha'. She lived anonymously under the pseudonym, if you like, instead of writing under a pseudonym as so many authors do.

She continued to use the name 'Janet Frame' for her writing.

So Nene Clutha was her 'real name' if you like, or rather her 'legal name', but that isn't what innocent readers take from it. They take it that she was born Nene Clutha.

And Janet Frame was indeed her 'pen name' - but only from 1958 onwards. And it was also her original 'real name'.

It is complicated. The Wikipedia biography, such as it is, never mentions the deed poll change of name. It is very easy for ignorant people such as the busybodies who tinker with Wikipedia, when faced with the two names, to make incorrect assumptions.

On Wikipedia, random factoids are presented as if they all have equal significance, which in the real world, they do not.

Thanks to the confusion and misrepresentation on Wikipedia, the contagion spreads out beyond. (And there are more errors there of fact and bias than just her name!)

Wikipedia is toxic as well as stupid

Of course there are not just ignorant editors on Wikipedia, there are malicious ones as well, and they have also had free reign with the Janet Frame article.

As an example of toxic interference with an article on the life and work of Janet Frame, there are in fact MORE words in her article devoted to a novel written about her, than to any of her own works.

In the last section concerning 'Posthumous works' there is MORE SPACE devoted to Janet Frame's greatest enemy Patrick Evans and his various derogatory fictional treatments of her, than there is space given to her OWN works.

Everything they say about the misogyny of Wikipedia is true. Women novelists are particularly badly served. Janet Frame is grievously unfairly treated.