From ironic to uncritical: the evolution of a CK Stead blurb 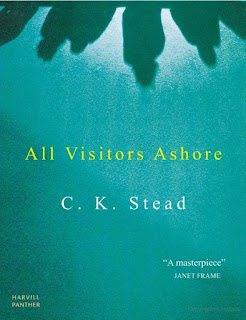 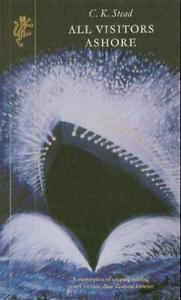 The  original blurb here reads:
"A masterpiece of creative writing."
Janet Frame New Zealand Listener
(It can just be made out on the bottom right of the above cover, and
was, to anyone not tone deaf, a pointed jibe.)
It's widely believed that Janet Frame was unconcerned with the vicious fictional portrait of her that CK Stead constructed in his novel All Visitors Ashore (1984) as revenge for what he perceived to be Frame's earlier unflattering fictional treatment of him as a balding mediocre poet in her short story 'The Triumph of Poetry' (1963).  Frame consistently denied that her fictional portrait had been intended to portray Stead. She even named the person who had inspired her story - another academic known to her.

This online review of All Visitors Ashore repeats the assumption that: "Frame had no complaints about the delayed retaliation."

Stead himself has also insisted that Janet Frame "wouldn't have cared", when he has been called out on his various misrepresentations of her (NZ Listener 14 August 2010).

And yet, when Frame was asked her opinion of All Visitors Ashore her public response was to call it "a masterpiece of creative writing." (New Zealand Listener). Frame took the high moral ground, and she meant what she said: it was fiction, and it was a piece of work, a clever one.

How thick are those who can't see the sly barb in that? And why are they even involved in literary fiction if they have so poor a recognition of irony?

Frame said plenty about Stead's revenge novel to her inner circle. But she didn't "go public"; she didn't like falling out with friends and she had a genuine fondness for Karl who (as he says of her too) could be "delightful company". She admired him and I know she would be disappointed if she had known how toxic he would become towards her and her estate after her death. Or perhaps she knew that would happen; she had a pretty good understanding of the darkness in the human heart, which is why she could tolerate ambiguity and complexity in her friendships.

As far as I know Janet never fell out with anyone she had been close to. That wasn't her way. She was the adult in the room in almost every case. She knew how to forgive and let live. I only knew her to intensely dislike one person - the loathesome parasite Patrick Evans - and to my knowledge she never even met Evans. She certainly never had any kind of relationship with Evans, so her rejection of him wasn't a falling out. He just didn't rate.

Privately, Frame could discern what was fiction and what wasn't. She was amused by All Visitors Ashore and she did think it was well done although the cold fury behind it was not lost on her. When you are a writer, Janet often said, everything that happens to you is "grist to the mill". For her, that apparently made even such deeply personal betrayals more bearable.

"I had no idea Karl was thinking about sleeping with me! I was so sexually naïve at the time!"

Since first publication Stead's own narrative around his novel has changed. Most recently he seems to believe that the character that is a lampoon of Frame is actually a biographical portrait of her. I suppose that is why he has had to take the "creative writing" bit out of the Janet Frame quote that he uses for a blurb. As Stead becomes even more curmudgeonly, he wants people to believe that his derogatory portrait is not entirely 'creative' but is also credibly 'realistic'.
Posted by Pamela Gordon