A bad review in more ways than one 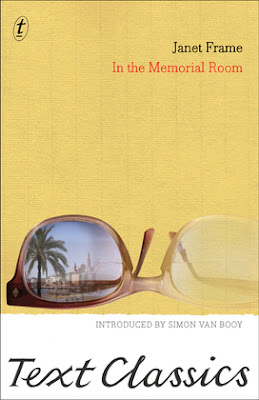 I see that CK Stead's new book of essays Shelf-Something-Or-Other includes his 'review' of Janet Frame's posthumously published novel In the Memorial Room that she wrote while she held the Katherine Mansfield Fellowship in Menton in 1974.

Among other things, many other things, Frame's short novel contains some compassionate and very funny portraits of well-meaning but terribly patronising middle class literary hangers-on. Some have called these vignettes 'cruel' but are they as cruel as the blatant condescension they depict, in which a hapless artist is harassed and exploited and squabbled over like a piece of cultural property?

(Please note that Stead is spluttering about a novel that kept its counsel for just short of FORTY YEARS.)

So Janet Frame is not permitted to satirise and lampoon human frailty? Without being accused of being ungrateful to those very kind self-sacrificing people who did all they could to help the poor thing despite herself? (As those busybodies apparently saw it.)

This pompous attitude, from the author of All Visitors Ashore, which contains a viciously unflattering fictional pillorying of Janet Frame herself, as well as other recognisable characters, is outrageously hypocritical.

For a start, helloooo, isn't this fiction? So only this self-proclaimed towering pillar of NZ Lit is himself permitted to have his satirical work treated seriously? But Frame is once more by another mediocre and unimaginative critic, relegated to the autobiographical corner and her work is parsed only for what some misguided detective THINKS they can source to her real life? Ignoring all the rest - and Stead has certainly not noticed a lot in this 13th of Frame's novels - he claims that in it, Frame is blind to the physical charms of the South of France. Where can his head be? There are the usual astute and lyrical Framean descriptions of the physical environment in the book. Stead claiming they are not there does not make it so - it just makes him look like a fool. Here is an example of one of Frame's passages:

I went out of the house and down the avenue to the beachfront and the promenade. It was too early for bathers but there were many people sitting on the seats watching the waves and the black-headed gulls riding again and again the large waves, and the camions tipping their loads of soil to make the reclamation for the new restaurant in time for the summer opening. The soil surged from the truck, some falling into the water, colouring the waves, the colour spreading along the waterfront so that the inner waves were clay coloured, the outer waves the azure so proudly talked of and written of.
I sat on one of the seats. I felt homeless. The Fellowship tasted, not bitter, but sour in my mind. The springtime sky was blue, the distant mountains white with rock and sun.
(In the Memorial Room, Janet Frame)

Frame has the last laugh as usual in a brilliant passage where she describes her protagonist (who is not her, despite the simplistic reading Stead gives him) watching a reclamation project, noting the 'azure' sea being turned a muddy colour in the process. The influx of tourists to the beautiful region has meant truckloads of dirt are being poured into the ocean to extend the land area, to make more room for the brief superficial visitor who demands only the surface appearance of sun and sea. Not unlike Stead himself demanding a vacuous travelogue when the plate set before him is apparently too rich and subtle for him. Frame even gives a jibe here about the dangers of cliché: "the azure so proudly talked of and written of".

Yet I expect Stead's new collection will attract the usual simpering praise from the usual sycophantic suspects.

Very recently this same vein of class disdain that poisons the upper echelons of 'NZ Lit' emerged in an essay written by former Frank Sargeson acolyte Graeme Lay. The mask slipped for a moment and the ordinary reader was exposed to the embarrassing fact of the snobbishness of those who regard themselves as the literary elite of New Zealand. Read the essay here:

It's worth looking at this shocking essay (perhaps it is satire?) in the context of CK Stead's characteristically disparaging descriptions of Janet Frame. It's easy to compare the upwardly mobile young academic Karl Stead's incomprehension of Janet Frame's obstinate non-conformism and working-class-rules, with Lay's deriding of Craig Marriner, the young author from the provinces who is sniggered at for his clothes and judged for his behaviour and the supposedly vulgar company he keeps. They're "not one of us", they're a joke.

Frame's unconventional clothes and frizzy hair (she wouldn't look out of place on either score today) seem to have been the chief symptoms of the mental illness she was believed to be suffering from. The true Bohemian was and is a rarity in New Zealand. Stead wrote in an earlier essay of the 'strangeness' of Janet Frame's clothes and her hair:

"there was something very strange about her - shyness, hypersensitivity, timidity, fear, to the point of morbidity, certainly; but even beyond all that, something intangible I felt very strongly, with a sort of animal apprehension when we were young; something that expressed itself physically, in her body language, her clothes, but in the body itself, neck, skin, hair." (CK Stead, Bookself, 2008) (my emphasis)

More excerpts from reviews here:
"A curtain call by one of the world's greatest authors" ~ The Weekend Australian

Posted by Pamela Gordon at 8:42 PM

Absolutely spot on. CK Stead's scorn of women writers needs to be put out there plain and clear. His new bromance with Steve Braunias just shows how easily the guys are scared off by the quiet and competent woman intellectual.