"The shortest novella in the world" ~ Bill Manhire 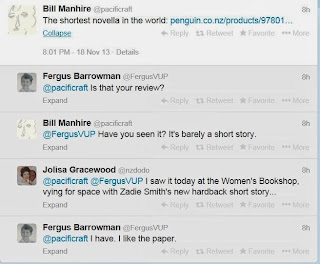 Almost a month after its release, The Mijo Tree by Janet Frame has had its first review* from within the New Zealand literary establishment.

At least I think it's a review. It could be the shortest review in the world.

Last night Bill Manhire, former head of the influential International Institute of Modern Letters, tweeted a link to the publisher Penguin NZ's page for The Mijo Tree, prefaced by his comment:

"The shortest novella in the world." 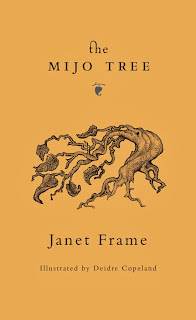 "Is that your review?" responded Victoria University Press publisher Fergus Barrowman, to which Manhire retorted:
﻿
"Have you seen it? It's barely a short story."
'Twitter Auntie'** Jolisa Gracewood entered the conversation, saying wittily: "I saw it today at the Women's Bookshop, vying for space with Zadie Smith's new hardback short story..."
And Fergus Barrowman confirmed that he had seen it too:
"I like the paper."
Apparently we are judging books now, by their length. Are fewer than 800 pages not acceptable any more?***
This critique of a shorter text seems particularly short-sighted, or short-memoried, in Bill Manhire's case, since his own Contributor Note in Sport 1 (Spring 1988) states this:
“Bill Manhire's reader-decides novella The Brain of Katherine Mansfield was published this year.”
I have a cherished copy of this work Manhire himself described as a 'novella', and on perusing it carefully I conclude that in terms of its short length, its unconventional narrative, and its subject matter, it is no more or less worthy than Janet Frame's book is of the term 'novella', which is a notoriously slippery handle anyway, often used to define what a book is NOT rather than what it is.
The word count seems very similar to that of The Mijo Tree. Spookily so.
In fact The Brain of Katherine Mansfield could well be a contender for the title of 'The shortest novella in the world'. 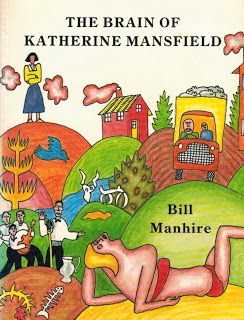 Bill Manhire is not the only person to have defined his short episodic work as a 'novella':

“In 1988, there appeared a longer piece of fiction, the novella titled The Brain of Katherine Mansfield..." Imagination and the Creative Impulse in the New Literatures in English, edited by Maria Teresa Bindella, Geoffrey V. Davis (1993).
The New Zealand Book Council also defines The Brain of KM as a 'novella': 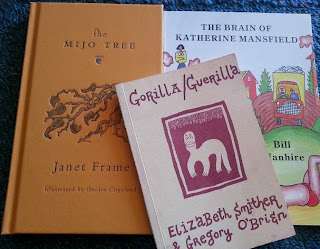 Small but perfectly formed: three illustrated gems that deserve to be counted among the classics of New Zealand literature: genre bending pieces that blend fiction, poetry, fable, myth and satire. But what do we CALL them?
Gorilla/Guerilla by Elizabeth Smither, illustrated by Gregory O'Brien (Earl of Seacliff Art Workshop, 1986) A tiny book of illustrated poetry, 'a whimsical polemic in verse'.
The Brain of Katherine Mansfield by Bill Manhire, illustrated by Gregory O'Brien (Auckland University Press, 1988) Paperback, 60 pages. Author says 'novella'.
Cf. The Mijo Tree by Janet Frame, illustrated by Deidre Copeland (Penguin NZ 2013), Hardback, 101 pages. Publisher says 'novella'.
In March 2011 The Mijo Tree was referred to as 'an adult fable' in a press release in which Penguin announced a three-book deal with the Janet Frame estate. I prefer to call it a fable or 'a fairy story for adults' and nobody from the Frame estate ever suggested that it be called a novella. In fact we demurred initially, but quickly conceded that at over 5,000 words, and because of Frame's treatment of the manuscript, binding it in cardboard covers and tying it with string, and because of the astonishing nature and quality of the piece of writing itself, the term novella is not an unreasonable one. So we gave our permission when the publisher chose to call it a novella. (Not every decision a publisher - or their marketing wing - makes, originates from an author or their estate, and sometimes there is a fight: this is something English Lit academics seem to know very little about.) Penguin doubtless chose the descriptor 'novella' for the purposes of finding a marketing niche for an awkward genre of book. It looks - and reads - like a children's book, but it's not. It's high quality literary fiction, but it's not a novel. It has more substance than a short story. Janet Frame clearly wanted it to stand alone, and as it is so unique in her oeuvre, it deserves to.  'Novella' is a convenient description so that bookshops might have a clue who to pitch it at and where to put it on the shelves. 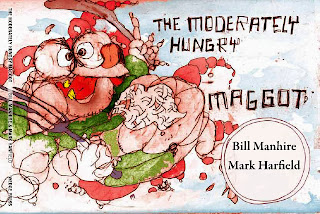 Exactly one year ago, Bill Manhire had a runaway best seller on the NZ Fiction market, The Moderately Hungry Maggot, "a children's book for adults", a parody on The Very Hungry Caterpillar, and a small but powerful biting satire on Kiwi society. I bought a couple of them myself. At $18 from the publisher (it cost more in the shops) they made superb Christmas presents.

Was it poetry? Or fiction? Or non-fiction? It sure wasn't a children's book. Does it matter? It was fun, and clever.

I suppose if I were churlish I might have observed that the text of the book with its seven short stanzas "was barely the length of a sonnet!!"
The Mijo Tree, at $25 retail, compares well as a gorgeous object also worth considering as a Christmas gift and a lusciously produced collectible, not to mention its cultural significance as yet another literary treasure from Janet Frame that didn't get past the gatekeepers.

Oscar Wilde's The Selfish Giant often appears as a standalone publication beautifully presented, loved by children and parents alike. But while we're counting, Wilde's story is fewer than two thousand words in length. About a third the size of The Mijo Tree.

According to Umberto Eco, the world's shortest novel is the Italian "El Dinosaurio" ("The Dinosaur") by Augusto Monterroso:

"Cuando despertó, el dinosaurio todavía estaba allí."
("When he awoke, the dinosaur was still there.")
I find it hard to believe that Bill Manhire, a poet himself, has been caught out complaining about the length of a literary text, especially from as great a poet as Janet Frame, without considering its worth, or even apparently reading it (along with the biographical essay at the back of the book which might have explained to him why this fable has been dignified as a separate publication). It seems particularly bizarre given that he himself has published extremely short prose texts complete with illustrations.
Surely he was joking: I hope so!
I'm reminded that Janet Frame had something to say about reviewers: "So many gave a clear indication they hadn't read the book." (From an interview with Canadian journal The Whig-Standard Magazine, 1984)

*The Mijo Tree has had an extremely positive notice in NZ Lawyer, and the Otago Daily Times has generously reported on the well-attended launch party held in Dunedin recently. But the silence in the actual 'book world' is deafening. Manhire's tweet gives a clue perhaps to the attitudes behind that. It seems it's still fashionable to ignore Frame, and if you can't ignore her, you're invited to be snide.
** "Twitter Aunties is a term coined by @GoodeyeMcWoowoo for an assortment of loosely connected, literary-minded New Zealand women, and some men, who chatter away online." ~ Gemma Gracewood
*** "Big is beautiful."

**** Literary elder has an attack of the prescriptives (move over, CK Stead!):