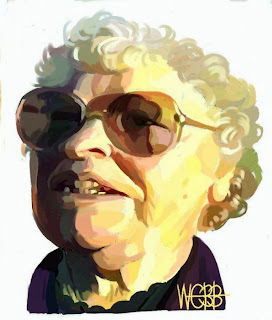 Caricature of Janet Frame by Murray Webb
National Library of New Zealand
Reference Number DX -001-567
Link to record: http://mp.natlib.govt.nz/detail/?id=36158&l=en
This quote by New Zealand cartoonist Tom Scott caught my eye a few days ago. It appeared in a Fairfax Your Weekend feature article on his friend the caricaturist Murray Webb:
‘‘I look at him in awe,’’ says Scott. ‘‘He’s as good in his own way as Janet Frame and Lorde and Eleanor Catton. He never quite got the national attention he deserves.’’
Let's hope that the article, written by Diana Dekker, goes someway towards redressing this perceived lack of local attention. But what intrigued me was the trio of celebrity women that Tom Scott compared the artist to. I had linked these three dazzling stars together myself in an earlier blog post: 100% Pure NZ Heroine.
I don't know if Murray Webb has done one of his famous celebrity likenesses of Lorde or Eleanor Catton yet, those brilliant, hardworking and outspoken Kiwi women who have excelled on the world stage just as Janet Frame had, but thanks to the National Library of New Zealand, you can see (above) one of his interpretations of Janet Frame.
Like Janet Frame, Webb abandoned an unsuitable teaching career in very short order: "He empathised with Janet Frame’s solution for finding herself a square peg in a round teacher hole: to walk out the school gate during class, never to return."